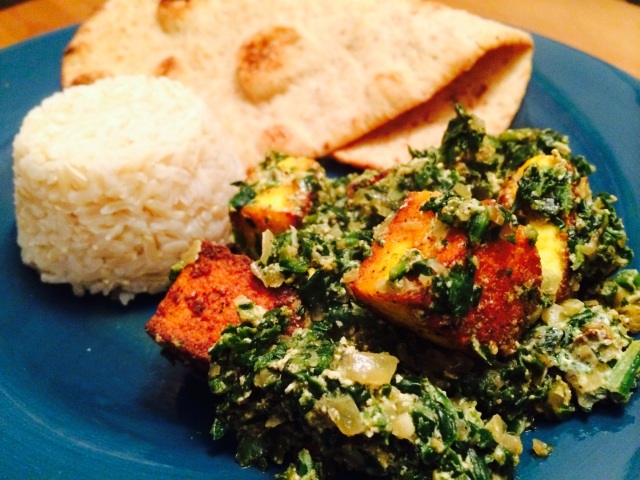 Often times, I don’t have all the ingredients for a recipe. Guilty. I also always make adjustments and dash things in to my own taste. But with this Saag Paneer, I followed the recipe and decided to go all out on the ingredients.

A good spice rack takes a while to build up. I know this is something that my non-cook friends would roll their eyes at, but it’s important to me for occasions like this (and occasions like Pumpkin Shrimp Curry!). And spices can be expensive – especially the fancy ones that you use in tiny amounts once in a blue moon. PRO TIP: you can buy spice by weight at Whole Foods! Hallelujah! So Elizabeth and bought all the spices for this wonderful Indian dish – we wavered on the coriander but ultimately decided: go BIG or go home.

This recipe is ingredient-heavy, but I promise, it’s simple and a lot of fun to make. We decided to try our hand at homemade paneer. Paneer is a soft, fresh cheese typically used in South Asian cuisine, and when it’s marinated in turmeric, cayenne, and oil and pan-fried, it’s just called “delicious.” 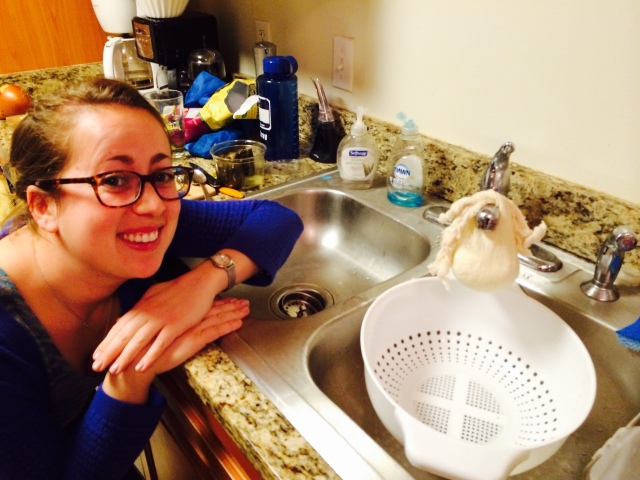 All you need is a gallon of whole milk, lemon, and cheesecloth. You just bring the milk to a gentle boil, add the lemon juice, and the curds and whey separate – like magic. Strain all of that through cheesecloth set in a colander and just let it set up in the fridge. And twenty minutes later, bam! CHEESE! When you make cheese at home, you realize just how magical it really is. Really, give it a try.

The Saag portion of this dish is all in the details – finely chopped spinach, onion, ginger, and garlic get cooked up with a myriad of spice: serrano chili, garam masala, coriander, and cumin. It all gets finished with yogurt and the pan-fried paneer. We served it with brown rice and naan, and let me tell you – it was heaven! I love Indian food, but I had never made it before.

*This is very serious: if you like Indian food, do yourself a favor and have a little adventure in your kitchen with this recipe, and whomever you make it for will fall madly in love with you. Pinky promise.

We got the recipe straight from Aarti Sequeira here:

For other fantastic recipes like Nutella cinnamon rolls and Shrimp Diablo, check out Fiesta Friday. Enjoy!