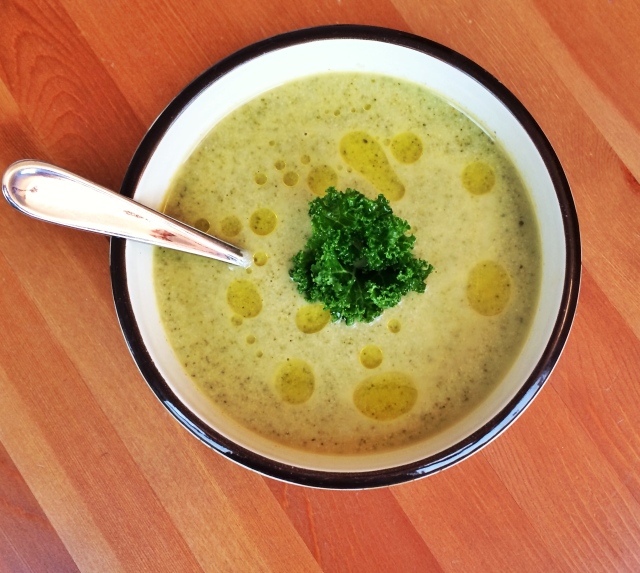 I have somethin’ on the mind. Polar Vortex or not, soup is always a good idea. It’s the original one-dish-wonder; it’s comforting; it’s healthy; I could eat it for days. And anyone who’s seen my bouillabaisse pot knows that I’m not lying….that thing can hold 30 cups. Yeah, I mean business when I make soup.

Oh, and not that anyone has made a New Years Resolution around this subject, but this soup would be great to balance out the tin of cookies and quart of spiked eggnog we consumed a couple weeks ago. And by “we,” clearly I mean “I,” and I totally don’t regret it. I am, however, making a lot of soup this month.

The best part about this soup is that it tricks you – it tastes creamy and indulgent, but it’s the picture of health. The tasty illusion starts with a great flavor base of caramelized onions and luxurious cashew cream, and then we pile in broccoli, kale, and warm spices. By the way, if you’re not on the cashew cream train yet, you need to be. (This Corn and Leek Soup is dreamy, and this Spinach Dip is one of my favorite go-tos.) 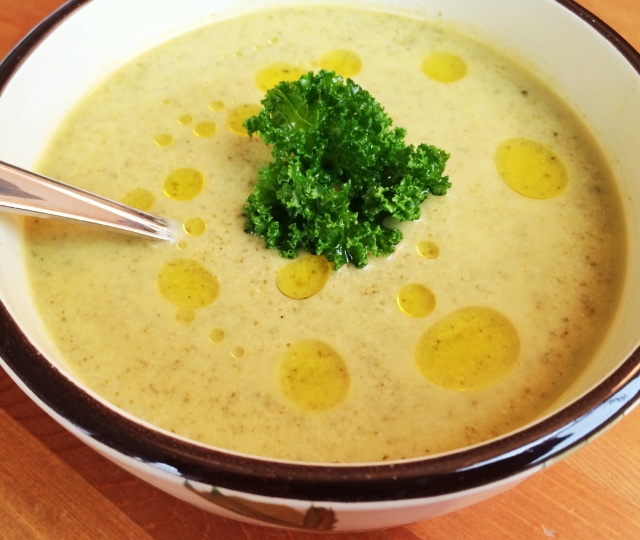 Cook the onions, stirring occasionally, until they’re golden brown and soft – about 15 minutes (if you notice them getting too dark too quickly, lower the heat to medium-low.) Add in:
-1¼ pound of broccoli florets (frozen is fine)
-4 c. of roughly chopped kale

Pour a splash of vegetable broth in the bottom of the pot and put the lid on to let the veggies steam for 10 minutes. Then add in:
-enough vegetable broth (or water) to cover the veggies (if you’re using water, just add more salt)
-1½ tsp. smoked paprika
-½ tsp. cayenne pepper
-2 tsp. dried oregano
-salt
-pepper

To make the cashew cream, measure into a two-cup pyrex liquid measuring cup (I find that the shape of the pyrex makes it easy to use an immersion blender here.):
-1 c. raw cashews

Cover the cashews with water and microwave for three minutes. Then, using the immersion blender (or a food processor) blend the cashews and water together until a very fine consistency is reached. If you think you’re done, keep going for another minute or two. The silky-smooth texture is key here. Stir the cashew cream into the soup.

Let the soup simmer for another 10-15 minutes until the vegetables are tender. Blend the soup with the immersion blender or in batches in a blender. Add in:
-the juice of half a lemon (about 1-2 Tbs.)

Taste the soup and adjust the seasonings. Drizzle with good olive oil and enjoy hot with some nice crusty bread!

7 thoughts on “Vegan Cream of Broccoli and Kale Soup”

Made these birthday cupcakes for @cake4kids! “Purple” theme request is the best 🌈 #bakeforacause #birthdaycupcakes #volunteerbaker
It’s Christmas cookie o’clock! 🤶🏻 #christmascookies #bonappetit #thumbprintcookies
My first big baking project in a while 😍 #nooksandcrannies
As requested @cake4kids a pink and blue ✨sparkle✨ birthday cake! I had so much fun making this one 😊