Let’s talk turkey. And by turkey, I mean pie. Last week we continued the annual tradition of Friends-giving at our apartment with the tiny kitchen that really should only have one…mayyyybe two people in it at any given time. But hey, you work with what ya got, right? This is the sort of thing that forces one to learn to prep ahead of time.

Confession: I didn’t even used to read all the way through a recipe before starting it; which, as we all know, can catch us unawares as we start cooking, only to realize that the dough has to chill for TWO HOURS until you can get any further in the recipe. So guess what? I totally put on my big girl apron and made this chocolately pie dough the day before! It feels good that I can be on top of my game in at least this one area of my life. 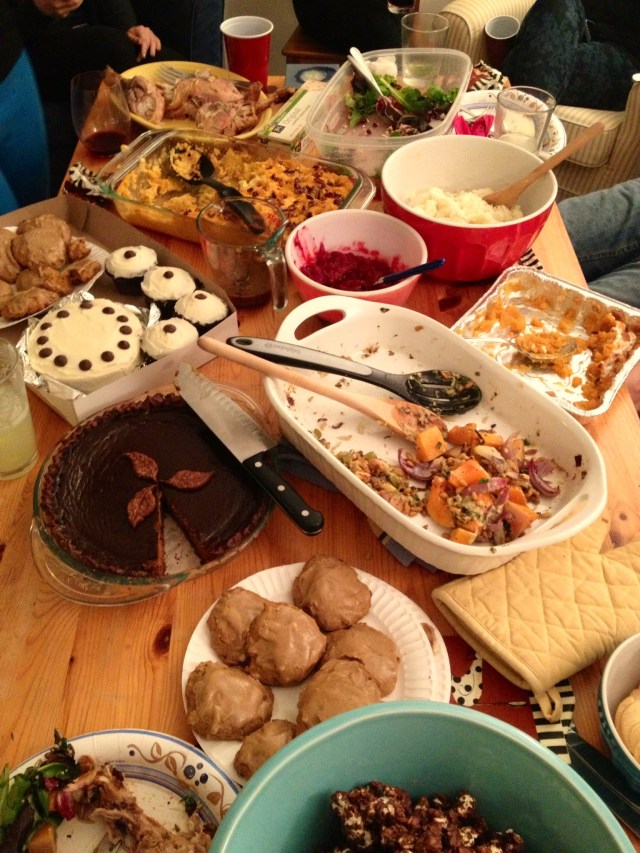 We got well underway with all of the Friends-giving cooking/baking early in the day and were totally prepared for all of our lovely guests! I’ve learned a lot since my totally unprepared birthday dinner extravaganza. I even left time to cut out some cute little leaves to decorate the top of the pie. (Also, just so you know, these leaves look way better with regular pie dough if you have some scraps around.)

The filling is a twist on your classic pumpkin pie: a bit of molasses to give it a deep, nutty flavor, and a dash of bourbon because, well, do we need a reason? It’s obviously adding it’s wonderful self to jazz up your Thanksgiving pie. Let’s be thankful for bourbon this year. Amen. 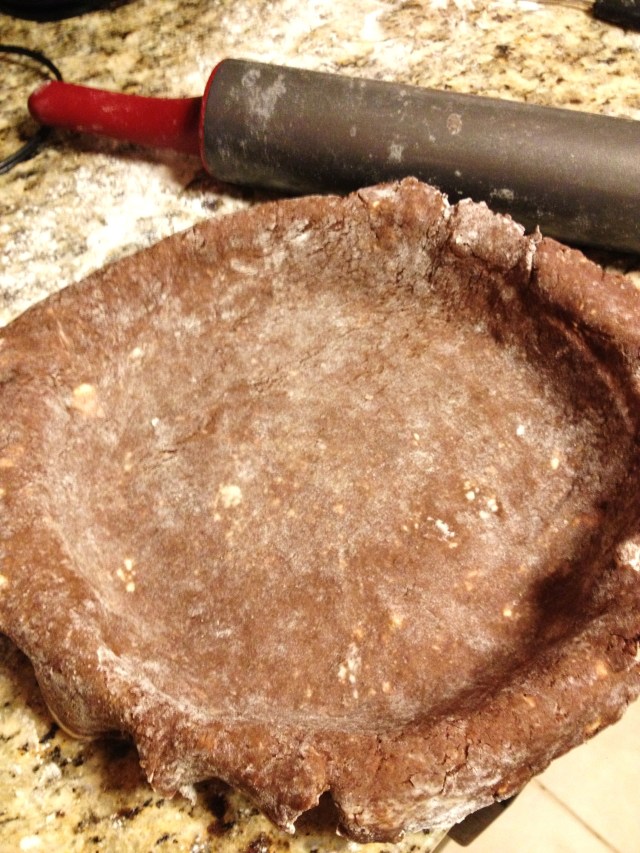 Pulse cocoa powder, granulated sugar, salt, and 1¼ cups plus 1 Tbsp. flour in a food processor to combine. Add butter and pulse until mixture resembles coarse meal with a few pea-size pieces of butter remaining. Transfer to a large bowl.
Whisk egg yolk, vinegar, and ¼ cup ice water in a small bowl. Drizzle half of egg mixture over flour mixture and, using a fork, mix gently just until combined. Add remaining egg mixture and mix until dough just comes together (you will have some unincorporated pieces).
Turn out dough onto a lightly floured surface, flatten slightly, and cut into quarters. Stack pieces on top of one another, placing unincorporated dry pieces of dough between layers, and press down to combine. Repeat process twice more (all pieces of dough should be incorporated at this point). Form dough into a 1”-thick disk. Wrap in plastic; chill at least 1 hour.
DO AHEAD: Dough can be made 2 days ahead. Keep chilled, or freeze up to 3 months.

Roll out disk of dough on a lightly floured surface into a 14” round. Using a rolling pin, transfer to a 9” pie dish. Lift up edge and allow dough to slump down into dish. Trim, leaving about 1” overhang. Fold overhang under and crimp edge. Chill in freezer 15 minutes.
Place a rack in middle of oven and preheat oven to 350°. Line pie with parchment paper or heavy-duty foil, leaving a 1½” overhang. Fill with pie weights or dried beans. Bake until crust is dry around the edge, about 20 minutes. Remove paper and weights and bake until surface of crust looks dry, 5–10 minutes. Brush bottom and sides of crust with 1 beaten egg. Return to oven and bake until dry and set, about 3 minutes longer. (Brushing crust with egg and baking will prevent a soggy crust.)

Whisk together in a stand mixer:

Pour the filling into the pie shell and bake at 350 degrees for 50-60 minutes, until the center is set and the crust is browned. I used a paring knife to cut cute little leaves out of the dough scraps and brushed them in egg wash until just browned. Arrange on the top and when the pie is cooled, dig in!

Je suis reconnaissant du bourbon.
I am thankful for bourbon.